Founded in 1989, St Brigids Youth club as it was known then was a direct response by local parents to the lack of social and sporting opportunities available to young people in the area. The success of the club can be seen by the fact that within a few short months of its beginning it had ammased a membership of some 315 young people.

A wide range of activities was on offer including all the usual indoor games and sport. The youth club continued at this level of success until the local Parochial Hall (the rental facility for the youth club – underwent a series of renovations forcing a reduction in the range of youth club activities on offer.

Paradoxically, it was this period of reduced activity that really sparked the youth club committee into action. After careful consideration of the options available for the development of the club it was decided that a purpose built centre offered the best way ahead.

It was at this point in the time that the adult population in the community started to look for activities, at first it was demands for sporting activities but very soon started to seek education and develoment oortunities. After visiting many youth clubs and commnunity centres in Donegal, Derry and wider afield, it was decided that the building would have to be purpose built to serve all the identified needs of the community.

A programme of fundraising had already started. How best to move forward, was the question that the committee had to face at almost every meeting. So a public meeting was held and all of the local community were invited. A large crowd gathered and serious input was made by a large proportion of those who attended.

As a result plans were drawn up and the decision that faced the committee was where to build. Land would have to be purchased. It was at this time that the local festival committee offered the land to the youth club and the growth from youth club to community centre truly began.

Building began with a very substantial voluntary contribution. Groups of builders with FAS was signed for a community youth training porgramme. This group of young people went on to complete the building under the supervision of skilled tradesmen.

The centre was finally opened to the public on the 8th of October 1999 by Dr. James Mc Daid. 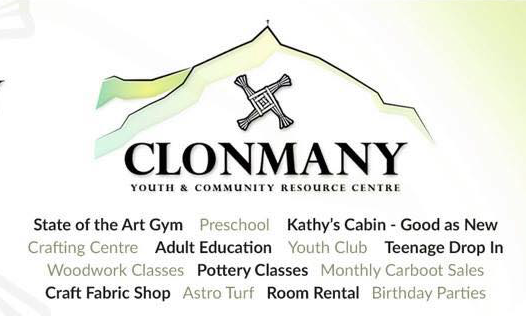 Fancy a walk around beautiful #Inishowen? Have a l

Sun's out in #Buncrana, the Shore Front beach is t

Great to meet our Bank Holiday Bikers - all set no

As the closing date for entries for the ‘Best Pl